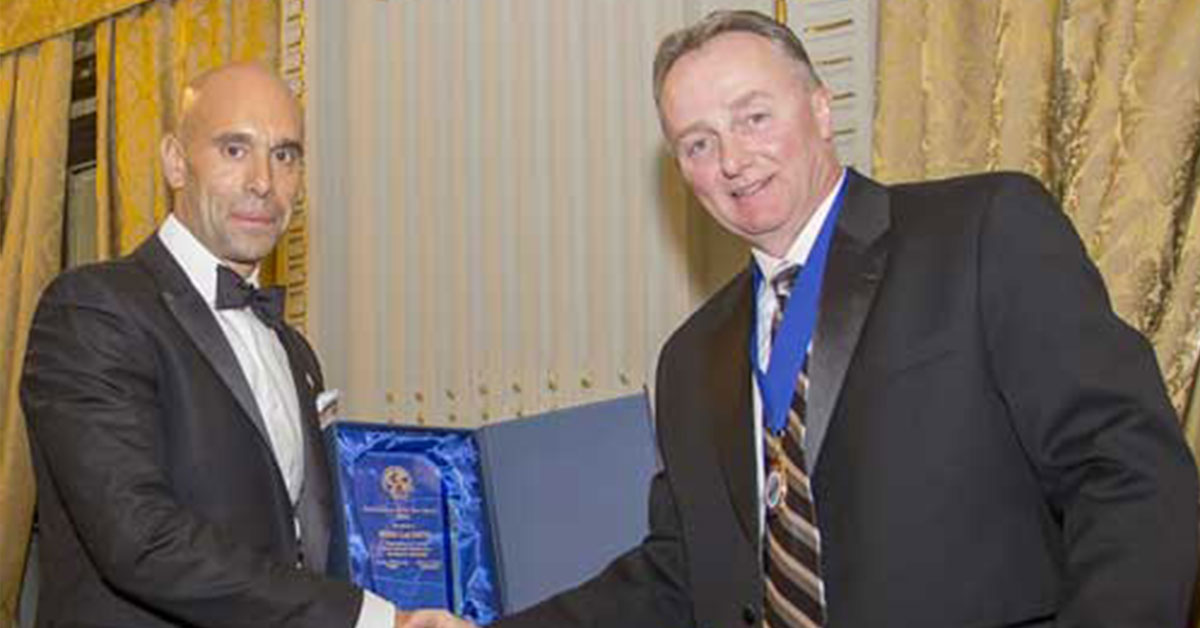 The investigation of a blackmail case on behalf of a high-net-worth individual has earned Conflict International director Mike LaCorte the prestigious Investigator of the Year award from the World Association of Detectives. Mike was presented with his award at a gala dinner in Bucharest, Romania by WAD Chairman Chuck McLoughlin, where he was also elected as 1st Vice President of the global association.

The case was judged against many other high quality nominations all entered anonymously so judges could rule on the work involved without knowing the name of the nominee.

Due to the client’s renowned profile, his identity and business sector have been withheld, but below is an outline of the case and its outcome.

The client approached Mike with concerns that he was being blackmailed and extorted for a sizable amount of money. The matter was of a sensitive nature and the high net worth client had put himself in a difficult situation.

Mike was engaged to identify the individual/s behind the blackmail, establish the reason and motive of the threat, and if necessary to liaise with the authorities with a view to bring the matter to a satisfactory private conclusion.

Mike Initially advised the client to go to the police however he was reluctant to do this and wanted the matter handled privately and discreetly as he was concerned it would affect both his reputation and personal circumstances if the blackmailers continued. In essence the client wanted the problem to go away and given his profile did not want to involve official authorities or have the matter reach the courts.

In order to understand how the threat was obtaining information for use of blackmail, and what type of information had been compiled, Mike advised his client that he needed to identify if there were any current security breaches of personal data. Mike and his team conducted a full technical sweep of the client’s office and associated addresses.

A forensic technology review of computers identified that remote spyware and email access has been installed on a particular PC. All emails sent/received had been accessed and this is how the threat had been able to secure sensitive and confidential information about the client.

Mike was able to have a letter which had been hand delivered to his client by an unknown individual, forensically analyzed. An analysis of the letter and its contents provided Mike with certain intelligence which he was able to develop. This subsequently led him to locate a third party based overseas and indirectly linked to the investigation. Mike determined this was a clear attempt at obfuscation.

The blackmail threat had also given the client a deadline date to pay. Mike advised that there was every chance a further approach would be made at some point to reinforce the threat and demand for money. Mike briefed his client on the importance of handling such an approach and suggested it was critical that his client continue his daily routines.

In the meantime Mike placed his client under counter-surveillance and covertly monitored his daily movements. Mike’s rationale was that ignoring the deadline date would force the threat to make some form of physical approach to his client, at which stage the surveillance team would be able to make a positive identification.

There were clearly obvious risks in taking this strategy and the client felt vulnerable to his personal position being exposed in the public domain. However, Mike always remained confident the threat would pursue the demand for money rather than walk away empty handed.

The deadline date came and passed and no communication was made. Following a period of approximately 2 weeks, Mike’s client was re-approached by an unknown individual to co-operate and pay the money demanded or the information held on file concerning his private life would become public very soon.

Conflict’s counter surveillance team was able to capture and covertly film the approach to the high net worth client, and subsequently monitor the unknown third party to a residential address. Once a residential address was established, Mike and his team were able to swiftly identify the unknown third party and compile a comprehensive background profile.

Mike’s research was able to establish that the primary individual identified was linked to an organized criminal gang. Given the circumstances Mike advised his client that it was imperative that the police were now notified and that the information was formally logged with the Kidnap and Blackmail Division. Mike passed his case file to the authorities and briefed the KBD team on the events which had taken place.

Mike wanted future safeguards in place for his client and arranged conference with a trusted law firm client who was quickly able to secure a court Injunction Order.

Mike then arranged a controlled covertly recorded meeting with the primary blackmailer where he was given an insight into Conflict’s case file, and evidential proof he was behind the blackmail threat. Visibly shocked by the evidence Mike and his team had secured, the blackmailer was advised in no uncertain terms to cease the threat against the high net worth client immediately or the authorities would be alerted and the police would arrest and charge him.

The Injunction Order remained in force against the blackmailer and following the meeting the threats stopped. Mike’s client was able to maintain his privacy and have the comfort of knowing that he would no longer be subjected to threats of blackmail from this criminality.

In bringing this case to a successful conclusion, Mike was able to put certain technical security measures in place to help his client avoid future risk exposure.

If you would like to talk to Mike about a personal or corporate investigation please call our London office on +44 (0)20 7917 2939 or email info@conflictinternational.com